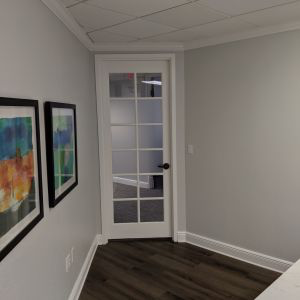 But some of our best Orlando business window tint customers are small businesses, and lot of the window film we install for them isn’t even on the windows of the outside of their businesses. Often we are hired to improve the form and function of office interiors by using decorative and privacy enhancing frost window film for businesses. This midsize Orlando business had a great layout with lots of interior windows that created great light inside the office and made the space feel warm and welcoming, but the conference room felt too exposed and was not comfortable during meetings. So they company hired us to fix the problem, something we did by recommending (and then installing) bands of privacy frost window tint. This tint blurs the view but still lets in plenty of light, and by leaving the upper and lower windows clear, the overall effect was to maintain the spirit of openness and collegiality but to add just enough privacy for proper productivity.